The New U.S.-China Climate Accord To fully implement the new climate accord between the two countries, the U.S. has committed to emitting 26 percent to 28 percent less than it did in 2005. China pledges to reach peak emissions or cap its total emissions by 2030, if not sooner. To reach that goal, China’s President Xi pledged to generate 20% of the country’s total energy consumption from clean energy sources, such as solar and wind energy, by 2030.

Next week the nations of the world will come together in Lima Peru in an effort to build momentum for a binding global climate accord. The negotiations come on the heels of the November 12 announcement of a landmark climate agreement between the U.S. and China at the Asia-Pacific Economic Cooperation (APEC) forum in Beijing. The world’s largest two economies and emitters of carbon dioxide agreed to curtail and contain their carbon emissions before the end of next decade. During the upcoming two weeks of climate negotiations in Lima, China will host a forum with the state of California sharing some of the early initiatives designed to drive implementation of the accord, a forum where ICLEI and partners will highlight the key role of local government action in achieving the agreement’s ambitious goals.

To fully implement the new climate accord between the two countries, the U.S. has committed to emitting 26 percent to 28 percent less than it did in 2005. This is double the current pace of emissions reduction from an average of 1.2 percent per year during the period from 2005 – 2020 to 2.3-2.8 percent between 2020 and 2025. China pledges to reach peak emissions or cap its total emissions by 2030, if not sooner. To reach that goal, China’s President Xi pledged to generate 20% of the country’s total energy consumption from clean energy sources, such as solar and wind energy, by 2030.

This new climate accord between the world’s two largest economies, consumers of energy, and emitters of greenhouse gases fundamentally reshapes the geo-politics of climate negotiations. It makes a global climate agreement at the climate summit in Paris 2015 a very real possibility, accelerates global clean energy deployment and associated economic growth, and prevents an estimated 640 gigatons of CO2 from entering the already carbon-thick atmosphere.

First, this new climate deal eviscerates climate obstructionists’ “China won’t engage, and we can’t do it alone” mantra. For years, the fossil fuel industry has deployed an army of supporters to try to drive a wedge between developed and developing countries and keep the world from reaching a globally binding agreeement. In particular they pitted the U.S. against China and portrayed them as the leaders of two opposite camps when it comes to combating climate change.

These climate obstructionists would often assert that “they – [namely China and India] won’t be engaging and reducing their own emissions.” The obstructionists have long argued that China, as the world’s number one emitter since 2006, does not and will not engage in ambitious emissions reduction efforts, and the U.S. cannot save the world alone, claiming these facts effectively tie the hands of the U.S. from pushing forward climate action. The argument continued that any unilateral attempt to abate emissions would not save the world, but rather ‘harm’ one country’s economy, while benefiting the economy of the other. Such “economic scare tactics” as Paul Krugman has called it, effectively prevented the U.S. from ratifying the Kyoto Agreement, the world’s first climate change treaty adopted in December 1997. However, after Wednesday’s announcement of the historic climate change deal between the two countries, it is no longer credible to cite China as the reason for inaction by the U.S. or the rest of the world.

Second, the climate agreement between the U.S. and China offers the world renewed hope for reaching a meaningful international climate agreement at the twentieth session of the Conference of the Parties (COP20). These sessions, often referred to as COPs, serve as the yearly meeting of the parties to the United Nations Framework Convention on Climate Change (UNFCCC). For the past nineteen sessions, negotiations often came to a screeching halt, because of the perceived chasm and division between developed and developing countries. That division was further exacerbated by the heated debate on cumulative emissions versus per capita emission. The culmulative vs. per capita debate has led to nations are more responsible for carbon emissions, and therefore should be more responsible for emissions reductions. Different ways of reporting global emissions by countries generates different lines of countries as the leading emitters. For example, if you examine cumulative, or total, emissions China leads the world as the number one emitter since 2006. It was responsible for 27% of global emissions in 2012 and thus is often portrayed as the ‘climate villain’. However, looking at per capita emissions, or dividing the total emissions of a country by its population, there is a very different distribution of global emissions. The U.S. leads the world with more than twice the amount of per capita emissions of the next biggest polluter (See Figure 1). 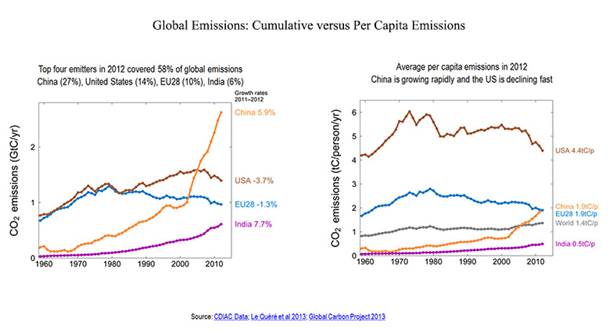 These two different frames often lead to an unfortunate and seemingly unresolvable climate tug-of-war between developed and developing countries.

Combined with the European Union’s pledge to cut its emission 40 percent by 2030, we now have commitments from more than half of the world’s total emissions (see figure 2). As many analysts point out, this new climate deal will undoubtedly increase the chance of reaching a meaningful global climate agreement in Paris in December 2015. It will also encourage other nations to follow suit and put forward their emissions reduction targets, as Denmark did by committing to go 100% renewable by 2050. The new climate deal helps put the global community much more firmly on a path towards real emissions reduction. It helps delay, if not avert, the Years of Living Dangerously.

Third, the climate deal between China and the U.S. is also positively game-changing for the global clean energy economy. In order to cap its emissions no later than 2030, China has pledged to increase its use of energy from zero-emission sources such as renewable energy and nuclear energy to 20% of its energy consumption by 2030 (see figure 3).

In doing so China is pledging to develop an additional “800 – 1000 gigawatts of nuclear, wind, solar and other zero emissions generation capacity” within the next 15 years or sooner. Renewable energy already represents 19% of global final energy consumption in 2012, and it continued to grow in 2013. This newly pledged energy capacity from zero-emissions sources of energy by China, which is “more than all the existing coal-fired power plants in China and close to the total electricity generation capacity in the US”, will indisputably further accelerate the already dramatic cost reduction and explosive expansion of global clean energy development.

Next, if we take a step back, and convert the new climate deal to gigatons of carbon emissions prevented from entering the atmosphere, Climate Interactive and MIT’s Climate Rapid Overview and Decision Support (C-ROADS) simulator estimates that, if fully implemented, a total of 640 gigatons of carbon emissions or more will be kept from being emitted into the atmosphere (see figure 4). 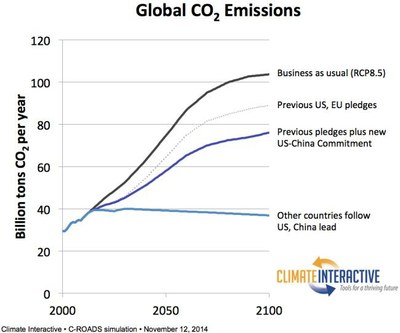 Critics are quick to point out that many of the above-mentioned impacts will only materialize if the new climate deal is fully implemented. But those critics understate the drivers of implementation. Regardless of the reasons the parties reached the agreement, China and the U.S., each have compelling economic and political reasons to pursue aggressive emissions reduction and clean energy development. These benefits include economic growth, new jobs, enhanced energy security, healthier living environments, and global leadership, among others.

The new climate deal promises to further open up vast new clean energy markets. Although this new economic sector is still in the early stages of development, renewable energy jobs already reached 6.5 million in 2013, according to the International Renewable Energy Agency. China and the U.S. were two of the leading countries with the largest number of renewable jobs – 2,640,000 and 625,000 renewable energy jobs (see figure 5). The total investment in renewable energy and fuels, excluding large hydro-electric projects, totaled at $214 billion worldwide. 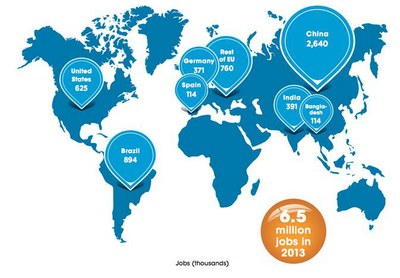 The new climate deal also offers real political benefits to both countries. For China, with its choking toxic air pollution, severe water pollution challenges, and serious environmental and health concerns in many parts of the rural countryside in combination with growing demands for more environmentally friendly practices and greener products, the U.S.-China Climate Accord is both timely and strategic.

President Obama and the Administration have made another big step forward in delivering on his plan – one of three key components of the President’s Climate Action Plan to “lead international effort to combat global climate change and prepare for its impacts.” By publically shaking hands with President Xi on this new climate deal, President Obama made it even more difficult for climate deniers in Congress to undermine this climate agreement. Any attempt to stop implementation of the new climate deal would mean not only opposing the President, but also China – the U.S.’s most important trading partner.

The landmark U.S. – China Climate Accord elevates the importance and urgency of local and state/provincial governments’ climate engagement. It also provides an ideal framework and political backdrop for bilateral initiatives aimed at facilitating and accelerating mutually beneficial climate collaborations such as the California-China Urban Climate Collaborative (CCUCC) – a dynamic and long-term exchange between cities in California and China seeking to mitigate carbon emissions, alleviate air pollution, and advance clean energy economy.

The CCUCC is designed to advance the work of California Governor Brown to engage China to jointly address the global threat of climate change. “I see the partnership between China, between provinces in China, and the state of California as a catalyst and as a lever to change policies in the United States and ultimately change policies throughout the world,” said Governor Brown signing a first-of-its-kind agreement on climate change between China’s National Development and Reform Commission and the State of California in September 2013.

The Collaborative also connects cities with subject matter experts from both countries to identify and address their unique challenges such as emissions reduction, air quality, transportation, water conservation, infrastructure resource and energy efficiency, waste management, among many other topic areas. Most importantly, the CCUCC is designed as the first step of a collaborative process that will set U.S. and Chinese cities on a sustainable and replicable pathway towards a long-term and effective city-to-city urban climate collaboration.

In short, the U.S.-China Climate Accord fundamentally reshapes the politics of global climate change for the better. It silences climate obstructionists, advances a cleaner global energy economy, and sets the world on a path towards realizing a more promising climate future. What’s more? Both the U.S. and China have major economic, social, and political incentives to uphold their promises and honor the full implementation of the agreement for a cleaner economy, healthier population, and safer climate for the generations yet to come.